Cala Mariolu or Ispuligidenie? Naming a beautiful coves in Sardinia 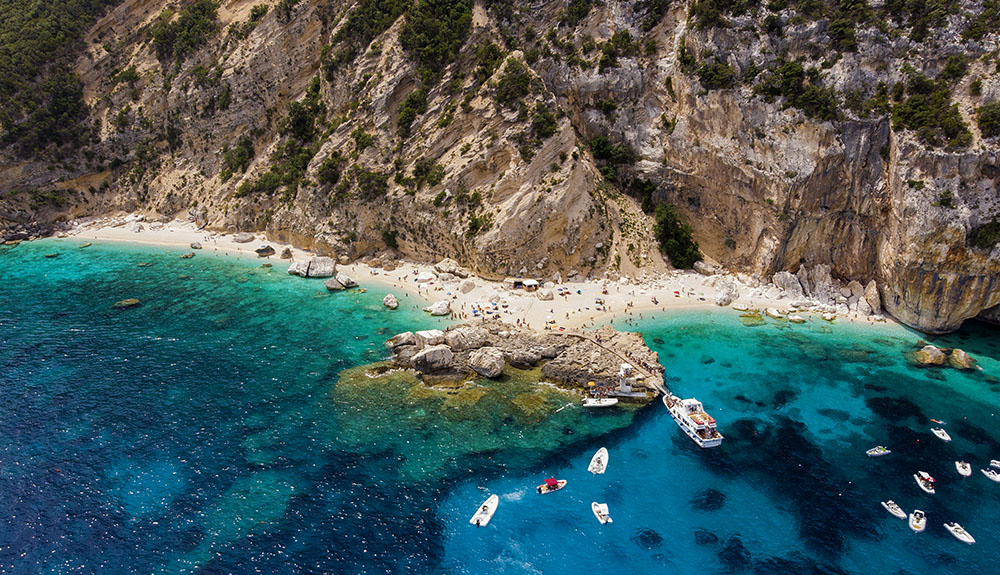 We are located on the east coast of Sardinia, and more precisely in the part enclosed by Cala Gonone, to the north, and Capo di Monte Santo, to the south.

Here, in the high and majestic cliffs overlooking the sea, where the peregrine falcon is frequently seen flying high, some of the most beautiful sandy coves in the Mediterranean are set, most of which can only be reached by sea, or through challenging but exciting paths that from the hinterland they wind through dry river beds until they reach the sea.

The ideal starting point to reach these heavenly places is Cala Gonone, whose port (not surprisingly) is the first in Sardinia for number of tourist boats, from real motor ships that make daily excursions with lunch on board, to sailing ships, yachts, rafts, and rental boats of any kind, with or without skipper.

The destination is always the same: to land in corners of paradise.

The origin of “Cala di Ispuligidenie”

Sailing from Cala Gonone to the south you will find countless coves and beaches more or less hidden, which represent real breathtaking places, as in the most beautiful dreams of each of us.

In addition to the breathtaking beauty of this place, really not to be missed for anyone who loves the transparent and crystalline sea, almost fake for its phosphorescent colors, Cala Mariolu contains an anecdote that explains its name. The literary translation of its original Sardinian name, Ispuligidenie, is Le Pulci di Neve (snow fleas).

It is said that in the mists of time some old Sardinian idioms did not contemplate the name of the colors, and then red was described with blood, blue with the sky, black with night, and white with snow (in Sardinian native language “nie”, precisely). The little cove is made up of very small and very white pebbles that give the sea a surreal phosphorescent color and incredible transparency. These pebbles are so small that they look like white fleas (Is Puligi) and here is the Sardinian name of Cala Mariolu: Le Pulci di Neve (snow fleas), or Is Puligi De Nie, then transcribed without spaces, and became Ispuligidenie.

How Cala Mariolu was born

Its current name (Cala Mariolu) dates back to the early twentieth century, when this area, relatively difficult to reach, was the destination of navigators who came from the peninsula to trade with the Sardinians, who lived for a long time in the charcoal pits of the coast, where they produced the coal they sold to the boats owners, mostly from Ponza (an ancient metal ladder from which you went up and down with sacks of coal is still visible in a part of the cliff).

The same navigators, in addition to the transport of coal, took advantage of the trip to devote themselves to fishing in these generous waters. Not having iceboxes on board, the catch, during the night, was stored in special nets, in a cave in the northern offshoot of Cala di Ispuligidenie, in which there was constantly a body of fresh water, separated from the sea by a tongue of sand that prevented other predatory fish from entering and raiding the catch.

It is a pity that these fishermen had not thought of the seals, which during the night crossed the rough barrier formed by the sand tongue, entering the cave and enjoying the succulent meal.

When at dawn the fishermen discovered that nothing was left of their catch, they said “In here there is mariuolo (thief)”, which in the Neapolitan language represents a sort of thief, imagining that some attacker had stolen their fish. Naturally, all the crews of the other boats were warned of the presence of the aforementioned “mariuolo” on that beach. Since then this wonderful inlet has taken the name of Cala Mariolu.

The Monk Seal, who was the real “mariuolo“, typical of the caves of these cliffs, was last sighted in the 1980s. To tell the truth, there were also other sightings in the following decades, but it is believed that they were due to generous doses of the typical Sardinian Cannonau red wine.

How to reach Cala Gonone

Excursions can be purchased directly at the resorts, with free transfer to the Port of Cala Gonone for boarding.

Hospitality, distances, beaches, entertainment and miniclub. All the precautions with which we will make your Covid-free holiday.